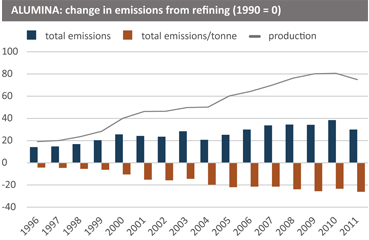 Total GHG emissions from Australia’s seven alumina refineries were 6 per cent lower in 2011, largely on the back of reduced production levels. 13.9 million tonnes of CO2-e were emitted in 2011, compared with 14.9 Mt in 2010 and 14.4 in 2009. Absolute emissions from Australia’s alumina refineries have increased by 30 per cent since 1990, despite a 75 per cent increase in production over this period.

The continuing strong performance of Australia’s alumina refineries in terms of emissions reduction is a reflection of the increased uptake of natural gas as a fuel source, mainly in the form of cogeneration – which offers superior levels of thermal efficiency through the provision of heat, steam and electricity for the process.