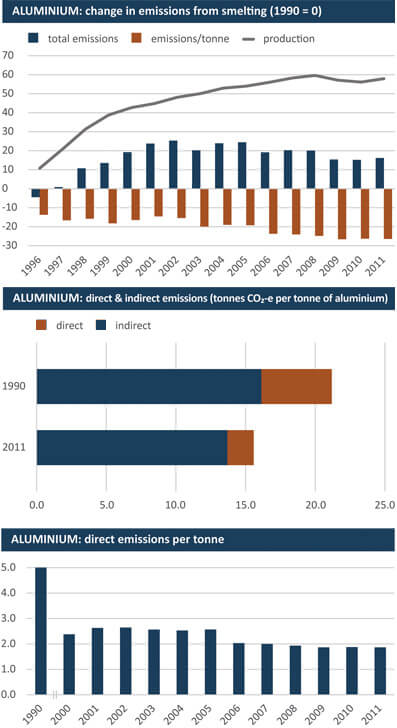 The smelting of aluminium is a very energy intensive process – and over 80 per cent of smelting greenhouse gas emissions are indirect (electricity-related) emissions. The remaining emissions come from direct (on-site) emissions plus the emissions associated with the production of alumina.

The greenhouse gas intensity of Australian primary aluminium production, not including emissions from alumina refining which are considered separately, remained steady at 15.6 tonnes of CO2-e per tonne of aluminium in 2011.

Total direct greenhouse gas emissions from Australian aluminium smelters were reported as 3.67 million tonnes CO2-e in 2011, up 0.7 per cent compared to 2010 but still well down on the 1990 level of 6.26 million tonnes.

Emissions from the purchase of electricity fell 0.2 per cent on an intensity basis over 2010. Indirect emission levels are closely linked to production and are therefore sensitive to economic conditions.