The Australian aluminum industry has been operating in Australia for over 50 years, and throughout that time has been a significant contributor to the Australian economy. The industry currently consists of:

Australian primary aluminium metal production was 1.96 million tonnes in 2011 – marginally higher than the 1.94 Mt recorded in 2010 and 1.1 per cent lower than the industry peak of 1.98 Mt in 2008. 2011 saw the Australian smelting industry’s two year run as the fourth largest producer of primary aluminium come to an end, narrowly edged out by the United States smelting industry as they brought production back online to meet growing demand in their region. Australia was the fifth largest producer of aluminium in the world with around 4 per cent of the market.

As can be seen in the accompanying map most Australian aluminium operations are located in regional areas, thus providing substantial economic benefits to these areas and to the economy in general.

Aluminium use in Australia is mainly in building and construction, transport and packaging applications, and is estimated to be around 450,000 t. The estimated capital replacement cost of Australian production capacity is over AUD$50 billion. 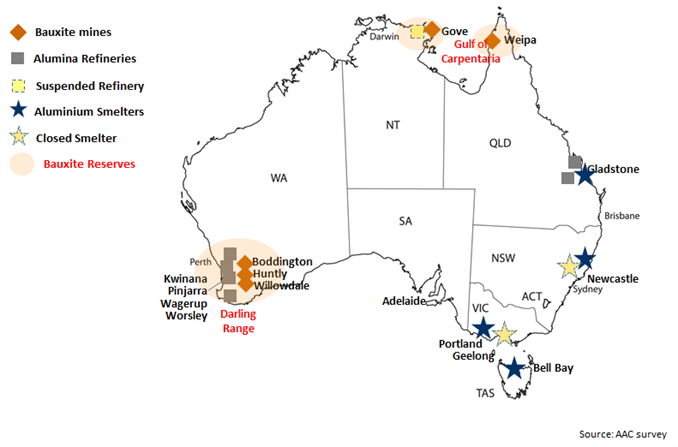