Australia’s greenhouse emissions reduction policy should be designed to prevent international distortions in production, particularly in those industries where Australia has demonstrated global leadership. Australian producers should not be burdened with significant costs not borne by competing international producers.

The Australian Aluminium Council supports the following principles that are designed to facilitate a response to the challenge of climate change without significantly damaging the international competitiveness of the Australian alumina and aluminium industry.

Even in a carbon-constrained future, increasing quantities of aluminium will be used globally as living standards improve, transport systems become more efficient and innovative lightweight construction systems are favoured.

Australia is a global force and technological leader in the production of bauxite, alumina and aluminium.  Despite some disadvantages, Australia should expect to see continued expansion and investment in these sectors based on our strengths of resource availability (including 25% of world bauxite reserves and abundant energy sources), skilled labour force, available land, and stable investment conditions.  Around 80% of the alumina and aluminium produced in Australia is exported for use in global markets and economies. 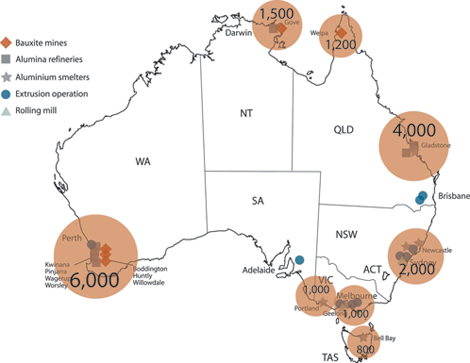 Operations in the Australian alumina and aluminium industries have a replacement value of over $50 billion and annually produce more than $14 billion of product. The industry employs around 17 000 people, many in regional areas as shown on the following map.

Australian climate change policy is being developed at a time when global demand and prices have fallen for many materials, including aluminium.  Both alumina refining and aluminium smelting are subject to significant cost pressures.  The price of aluminium is gradually recovering from lows in early 2009.  This brought about significant structural reductions in global capacity and employment with high cost operations being closed permanently and many mid-cost operations wound back or temporarily shut.

Impact of an Australian Carbon Cost on Operations and Investment

Government policy, such as a price on carbon emissions, has the potential to impose substantial costs on Australian producers that are not faced by international competitors supplying the same markets.

The impact of an Australian carbon cost on international competitiveness can be understood by considering a global cost curve.  On this curve, global production capacity is arranged with the lowest cost producer on the left and higher cost producers on the right.  Producers toward the low (left) end of the cost curve will be more profitable, more viable and more likely to attract investment of sustaining capital in the facilities.  Investment in new facilities will proceed if they can attain costs at the low end of the cost curve.

Producers on the higher (right) side of the cost curve make lower profits and, more significantly, are unlikely to attract reinvestment.  As a result they will only continue to operate while profitable but will be the first facilities wound back or shut when the market falls and will be the most likely facilities to be shut permanently (and replaced by new investment lower on the cost curve).

If the cost curve is considered in four quarters, they can be characterised as follows: 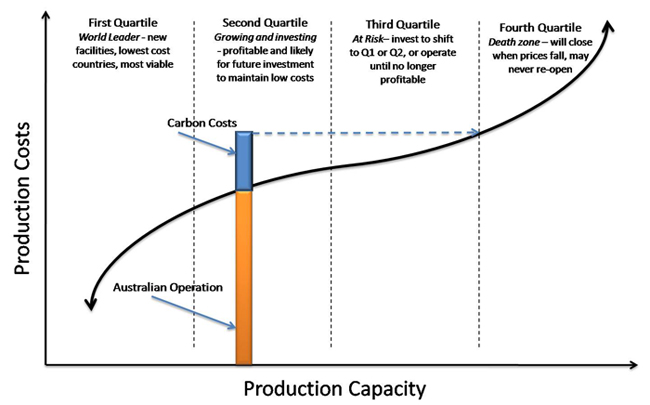 Analysis of the range of costs that might be imposed by climate change policy suggest that they could shift an Australian alumina or aluminium producer from their current position in the first or second quartile – where the long term viability of facility is secure – to the third and fourth quartiles – where investment is unlikely and shutdowns are likely in response to market slumps and permanent closure is virtually inevitable.

That is, climate change policy could change Australian facilities from operations that would be profitable in the long term, operate at high capacity and attractive for future investment to operations that have no long term future, where capacity will be curtailed in response to reduced demand and where investment is unobtainable – leading to eventual closure.