The Australian aluminium industry has been operating in Australia since 1955, and over the decades has been a significant contributor to the Australian economy. However, despite many decades of economic contribution, the industry is globally comparatively young and well maintained. In fact, every reduction cell (or pot) in an aluminium smelter is replaced every 5-6 years, so while the buildings can be a lot older, the operating system is not.

The industry currently consists of:

Australia is the world’s largest producer of bauxite. In 2021, Australian bauxite production was 101 million tonnes (Mt). 39 Mt of bauxite was exported, and the remainder converted to Australian alumina.

Australia alumina production in 2021 was 21.0 million tonnes. Australia maintained its position as the second largest producer of alumina and the world’s largest exporter, with 18 Mt exported in 2021.

Australia’s aluminium industry is a key employer and contributor in the communities in which we operate. We: 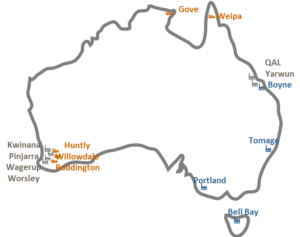