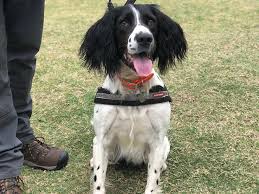 The ABC Radio Country Hour programme visited Gove in September 2019 to chat to Rehabilitation Specialist Faye Lawton on the work she’s leading for Rio Tinto with the NT Government and CSIRO to eradicate the Yellow Crazy Ant in North East Arnhem Land.

Thought to be introduced to Arnhem Land from military activities during WWII, Yellow Crazy Ants are considered to be one of the world’s worst invasive ant pests. They can form huge super-colonies containing thousands of queens and have worker densities reaching up to 20 million ants per hectare. The ants pose a major threat to Australia’s biodiversity, out-competing and displacing native invertebrates, which are crucial for ecosystem health.

Since 2003, Rio Tinto has been working with CSIRO and Yolngu Business Enterprise on eradicating the Yellow Crazy Ant through detection and baiting activities.

But recently the team gained a new member—and he’s adorable. Meet Jet, an English Springer Spaniel, who has been trained to detect Yellow Crazy Ant colonies.

Faye, who has been part of the eradication project since the start, says having detection dog Jet on the team is a huge benefit.

“Jet has been trained as a wildlife conservation detection dog and is fantastic at finding where a particular species—in this case Yellow Crazy Ants—might be hiding. Trials show detection dogs are able to locate targeted species up to 300 per cent more effectively than humans, so we’re extremely lucky to have him here helping our environmental team map any Yellow Crazy Ant locations,” she said.