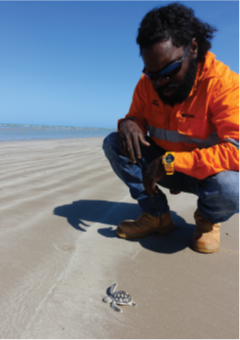 Feral animals are a well-known environmental problem in Australia and impact the environment in many ways. The predation of turtle eggs by feral pigs is a significant reason for listing feral pigs as a key threat within the Weipa Operations area, particularly along the Amrun coastline between Winda Winda Creek and Ina Creek. Previous field surveys in this area have documented significant destruction of turtle nests by feral pigs. Pigs were found mostly along the beach where there was direct access to the beach from bushland.

Traditional Owners consider pigs to be part of the country and are seen as a food resource. Activities to control pigs that do not consider how to use the pigs as a resource are seen as wasteful, particularly activities of recreational pig hunters. Traditional Owners do understand uncontrolled feral pig populations are prevalent and are likely to be having a significant impact on country, including predation on turtle eggs.

In an effort to reduce this impact, a turtle monitoring programme was formed during Amrun’s construction phase as part of the project’s Land and Sea Management Programme (LSMP). The LSMP has continued into the project’s operational phase and presents significant opportunities for Traditional Owners to be actively involved in both planning and participating in cultural heritage and environmental management activities.

The team has achieved great success in 2019. To date, there has been a significant reduction in turtle nest predation to approximately 30 per cent, down from 95 per cent at the start of Amrun’s construction in 2015. More than 850 feral pigs have also been eliminated through ground and aerial shooting programmes, which is a direct link to the improvement in turtle hatchlings.

The programme will continue in 2020, with LSMP members scheduled to receive training in turtle tracking and nest identification in the hopes to further reduce the impact on the region’s turtle population.