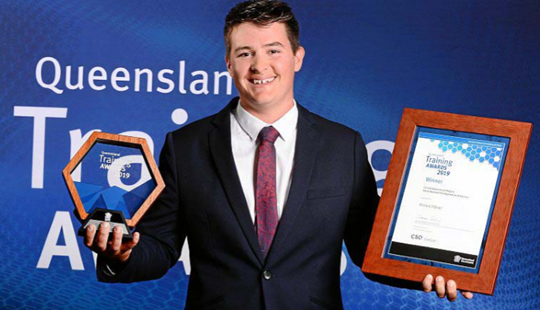 Congratulations to Yarwun maintenance technician Richard O’Brien, who was awarded the ‘Harry Hauenschild Apprentice of the Year’ (Central Queensland) at the Queensland Training Awards, held in August 2019.

Richard joined Yarwun as a first-year electrical and instrumentation apprentice in 2014, while studying an Associate Degree of Electrical Engineering at the same time. Since then, Richard has displayed hard work and dedication in all aspects of his role, which was recognised after he was offered a trade role at Yarwun as a fourth-year apprentice.

Richard said he was equally shocked and proud to receive the award, and the secret to his achievement was communication and relationship building.

“Forming strong, honest and lasting relationships with my colleagues, peers, teachers and leaders has been immensely beneficial,” Richard said.